Your session will expire in 0 minutes.

Instead of testing you on every math topic there is, the new SAT asks you to use the math that you’ll rely on most in all sorts of situations. Questions on the Math Test are designed to mirror the problem solving and modeling you’ll do in:

For instance, to answer some questions you’ll need to use several steps —because in the real world a single calculation is rarely enough to get the job done.

The Math Test will focus in depth on the three areas of math that play the biggest role in a wide range of college majors and careers:

The Math Test also draws on Additional Topics in Math, including the geometry and trigonometry most relevant to college and career readiness.

What the Math Test Measures:

Calculators are important tools, and to succeed after high school, you’ll need to know how — and when — to use them. In the Math Test – Calculator portion of the test, you’ll be able to focus on complex modeling and reasoning because your calculator can save you time.

However, the calculator is, like any tool, only as smart as the person using it. The Math Test includes some questions where it’s better not to use a calculator, even though you’re allowed to. In these cases, students who make use of structure or their ability to reason will probably finish before students who use a calculator.

The Math Test – No Calculator portion of the test makes it easier to assess your fluency in math and your understanding of some math concepts. It also tests well-learned technique and number sense.

Although most of the questions on the Math Test are multiple choice, 22 percent are student-produced response questions, also known as grid-ins. Instead of choosing a correct answer from a list of options, you’ll need to solve problems and enter your answers in the grids provided on the answer sheet.

Below is a sample of the instructions students will see on the test. 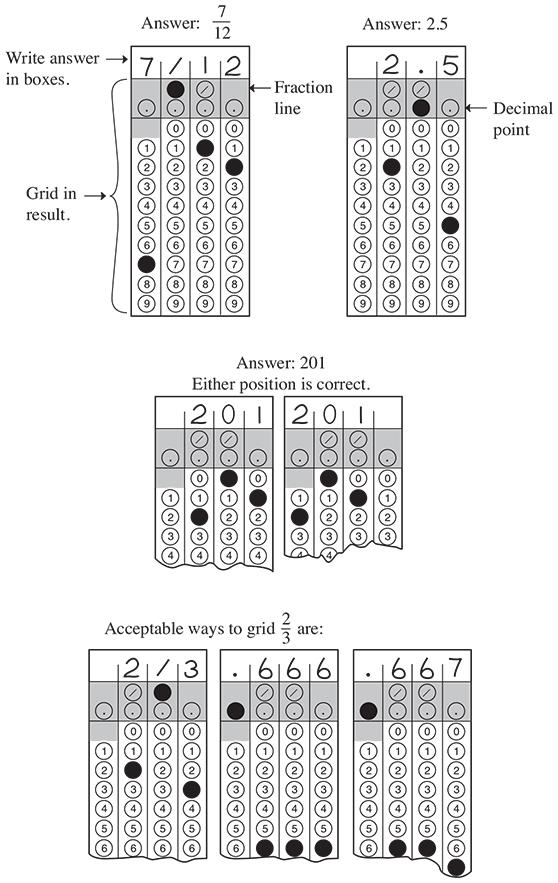